May 3, 2004 - Today we booked the last remaining wedding date for 2015.  Please check out our Facebook page - and "Like" us there if you're interested in receiving immediate EMAIL notification of any unexpected cancellations.

2013 was another busy (and eclectic) year at the farm - and not just the usual maintenance & break-fix stuff.

In addition to eight weddings, sundry livestock births/sales, Trail Bridges, Coyotes, and Trail Benches (detailed below), we also managed to:

The "Bridges of Harnett County" (NOT!)

April 27, 2013 - Our good friend, Clayton Davis, and Rick built the (almost?) last footbridge today near the north end of Ridge Trail (a 2,520' long trail running through the center of our forest).

It was a typical "small project" that blossomed into one involving tools ranging from 18v screwdriver drills to our backhoe.  But it's finished and all dressed up with earthen approach ramps and lots of rye grass seed - our third bridge on the property.

For a photo-diary of the project, please click here.

March 21, 2013 - We've known coyotes MUST be around here, but our game cameras never caught one unil last night﻿.  So here's our first - captured at a remote fence corner at the newest longleaf pine field.

The coyotes aren't causing a problem here.  Our chickenhouse is well-secured and they don't seem to bother the goats or geese.  And they are far too small to threaten the cattle....

You can see more of our wildlife photos here. 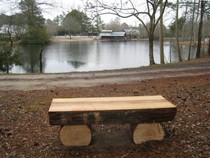 February 21, 2013 - Today we completed the construction of our first log benches that will eventually become an entire series scattered across our entire (2+ mile) trail system.

Our first two of these benches now rest along Lake Fran Trail, and two more are set deep in the woods along Bill Trail.

This is just the beginning and we plan to erect many more benches of this design.  They are made entirely of bald cypress, a naturally decay-resistant wood grown locally along the edges of swamps and bogs.  You'll find several examples of these trees growing on the trail around Lake Fran.

fol·ly  - /ˈfälē/ -Noun  ... 2.  A costly ornamental building with no practical purpose, especially a tower or mock-Gothic ruin built in a large garden or park.

November 27, 2012 - Today Rick and Glenn Lucas (our friend and master carpenter) finished a 10-day project: building Rick's Folly, a wildlife viewing platform raised (for good viewing) 14' above the high water mark of the swamp our beavers have made along Thornton's Creek.

The platform itself is 16' x 10' and they built it (and the walkway/stairway to it) while the swamp was dry (its annual post-summer mode).  Rick made a photo diary of this efffort (sometimes hanging one-handed from the scaffolding...) and it's now part of our Photo Gallery.

December 30, 2012 UPDATE: Good thing we finished it when we did.  The swamp water had returned by Christmas and now the footings Glenn and Rick built are already standing in water.  We're already seeing ducks and red tailed hawks in there!

September 28, 2012 - Today we booked the last remaining wedding date for 2013.  Please check out our Facebook site - and "Like" us if you're interested in receiving immediate EMAIL notification of any unexpected cancellations.

September 3, 2012 - Today we completed the last segment of road building by adding another 1,700 feet of roadway that extends to our first longleaf pine field at the southern end of the property.  Now our haywagon route is nearly 1.5 miles long - and extends across Lake Fran thru forests, pastures, soybean fields, and a longleaf pine seedling tree farm.

January 27, 2012 - In the past 24 hours, we've had five(!) new arrivals join our farm critter collection. Our fainting goat herd increased when our two nannys (Sassy and Belty) each delivered TWINS.  And today one of our Devon cows delivered a large bull calf.  All (including the moms) are healthy and happily feeding. 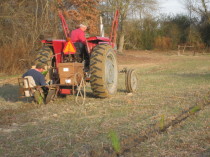 December 20, 2011 - Today we planted another field with longleaf pine seedlings, giving us a total of 8.6 acres of these trees in cultivation (and 9.5 acres remaining in soybeans). 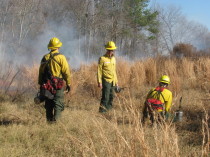 December 19, 2011 - Two years ago we planted 1,200 longleaf pine seedlings in a 3.8 acre field in the southern part of our land that had previously produced soybeans.  By now, the seedlings were established and competing for light with an abundance of weeds.  So it was time for a "controlled burn."

We contracted directly with the N.C. Forestry Service and today three rangers came to do the job.  It took only 90 minutes.  Overall, there was a great deal more smoke than fire.  But the field was cleared of weeds; our trees will have a clear sky view when growing season returns next Spring.

Longleaf pines actually require periodic burning to flourish.  We expect to burn this field again in 2014.  And by then we hope to have TWO fields of longleaf pines growing here.  The planting crew for the second field arrives tomorrow.

On November 15, 2011 the Google's search engine "crawler" discovered our new updated site and suddenly people looking for "farm weddings" began contacting us directly.  By November 25th, we had met our "no more than three weddings" goal for the Spring of 2012 with bookings for April 20th, 27th and May 5th! 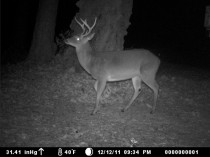 On November 8, 2011 we installed our repaired Moultrie game camera at one of the recently installed duck boxes in the still-dry swamp area.  Using its infrared flash, it began capturing the foraging activity of racoons, foxes, and deer.  Within a few days, the waters of Thornton Creek began refilling the swamp area so we moved the camera to a nearby game trail where it continued to capture more of the same activity.  After a week, we moved the camera again - this time to the base of a large spanish oak at the edge of the soybean field.

Some of these photos are published HERE. 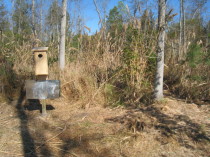 November 1, 2011 - Last month we built twelve cypress duck boxes and placed them in favorable locations near our several ponds and along the edge of Thornton's Creek.  We're hoping some colorful wood ducks select these boxes for their nests next spring.

UPDATE: November, 2012 - After the swamp waters receded this Fall, Rick went to the duck boxes along Thornton's Creek and found THREE of them had been occupied by wood ducks last hatching season.  He cleaned and refreshed the bedding in each and we're hoping for more nests in the Spring of 2013.  Stay tuned!

October 1, 2011 - After a summer of terrible heat and drought, we discovered the Thornton's Creek swamp had essentially dried up.  The desire to explore this area for the first time was irresistable - and so Clayton Davis again joined us for another of our famous trail-building efforts.

The 2,000+ feet of new paths wander along the now-dried Thornton's Creek bed and lead to several points of contact along the powerline easement that runs along our western boundary.

This area is interlaced with game trails.  During construction, we flushed several deer, small "critters" and even surprised a gray fox. 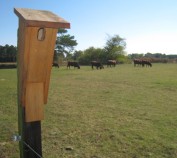 April 30, 2011 - Earlier this month we placed twelve new blue bird boxes along the fencelines of our pastures and in other favorable places around the property. Today over one half are occupied with baby blue birds! We should have a beautiful summer!

Over the Winter of 2010-2011, we added over a mile of new trails to our existing trail system. Most are along the margin of our Thornton's Creek wetlands.

Construction was often heavy-going and required penetrating these deep, vine-infested woods "by hand" aided only by chainsaw. Instead of burning it, we accumulated the cut brush in several piles suitable for wildlife refuge.

During construction, we found much evidence of beaver habitation - but none of it recent. So where are the beavers now?  We'll keep looking....

Given the number of game trails, we decided early on that this project's principal goal was to find suitable sites for future wildlife viewing areas. A second objective was to see whether we could develop access to the powerline easement that runs along our western line. We'd met each of these goals by the end of this long arduous project.

Many many thanks for his constant encouragement and help go to our friend, Clayton Davis.